Springhill Suites is the only ocean front property on Flagler Ave  in New Smyrna Beach Florida. Spacious suites and up-to-date meeting and event spaces perfect for planning, training, connecting, socializing, and celebrating. Free Wi-Fi, oceanfront pool, and state of the art fitness center. Our Market is open 24/7 for snacks and necessities. While a variety of dining experiences awaits outside our doors, our Barefoot Bar can satisfy your thirst without having to leave the comfort and beauty of our brand new hotel. New Smyrna Beach is located just minutes from the world-famous Daytona Beach, less than 2 hours from the Orlando theme parks, and 45 minutes from Cape Canaveral. We offer a small beach town atmosphere with fun events nearly every night. 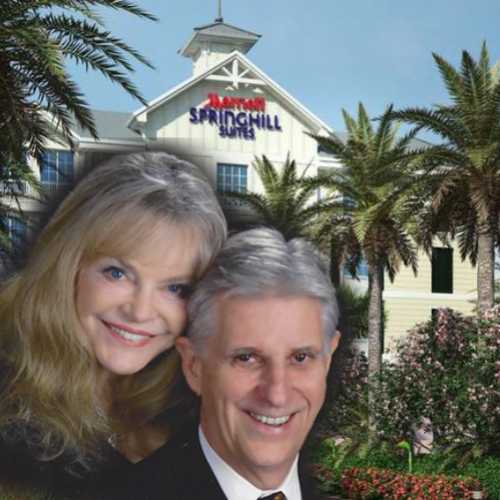 Randy and Sheri McHenry moved to Florida and began investing in real estate in New Smyrna Beach. Having developed a great interest in hotels from having traveled extensively, they noticed that the hotel market was still greatly under-served in New Smyrna Beach. This is how Springhill Suites, now the jewel of NSB was born. It remains the only hotel, in the heart of the charmingly eclectic beach-side, shopping and dining district and only a few steps from the beach.

Randy McHenry’s engineering degree was earned at the United States Naval Academy. After his military service he oversaw product production for Eastman Kodak. He eventually took a position with Merrill-Lynch Investment company. He became a top-producing agent, and then district manager in Seattle, Washington, and then was selected to head the Los Angeles and Orange County, California offices. He retired from investments to take ownership of, and expand, the wholesale gift company, “Artistic Gifts”, which soon became a major player in the gift industry, whose diverse line of products could be found in thousands of stores, large and small, across the country.

In the early 1980’s, Sheri McHenry began designing decorative, gift items and collectables. She quickly moved on to manufacturing them in a “cottage industry” manner, at times employing as many as 175 independent workers who worked from their own homes. Like her husband, she sold her products to major stores such as JC Penney, Nordstrom, Victoria’s Secret, Hallmark and others, as well as to thousands of independent gift stores. Her formal training, and always her preferred avocation, was in the field of Interior Design, holding a design certificate from IDI, Interior Design Institute, in Newport beach, California. Her training and skills were put to good use in the elements of design found in the McHenry’s hotels, winning the praise and frequent return of guests who enjoy the ambience and peaceful palette of the lobby and guest-rooms alike.

Sheri had been a folk-singer in her earlier years in the Pacific Northwest, and has revisited that passion by singing and tickling the ivories of the baby grand in the lobby of the Springhill Suites on Friday evenings for guests and local “fans”. Sheri is happy to share her Friday night “gig” as well as her piano and sound system with other, accomplished, local musicians and out-of town performers. These musicians will often perform impromptu miniconcerts to the surprise and extreme delight of hotel guests and locals who may be enjoying some refreshment at the “Barefoot Bar”.

Together, the McHenry’s are the proud parents of seven children and 19 grandchildren, all following the McHenry tradition of diligently learning, working and sharing one’s passion, with the goal of creating beauty, harmony and happiness in one’s life and in that of others.

Interested In Joining Our Team? Check Out Our Job Opportunities!

Any type of meeting in mind, now is the time.
Learn More

Give everyone a chance to reconnect and reflect
Learn More

Choose any package, activity or customize an itinerary.
Learn More